A method for finding CC used in CAS

Some CC in CAS don't show their custom thumbnails.
It has become pretty hard for us to find out which makeup or eyebrow we used for creating a SIM as the time we'd like to share them.

Here's come the solution, since it's not pretty easy but I think it's useful.

First, write down how many CC you have used.
Second, share the SIM as a sim3pack file.
Third, use s3ce to unpack the SIM.
Fourth, use s3PE to open the major unpacked package file including the information of the SIM.
(It would be the largest file if you used lots of CC in package file.)

Sort the items by Tag.
Find "_XML".
In the _XML item it will show CC you used in sim3pack file.

These files will also be unpacked as package files. 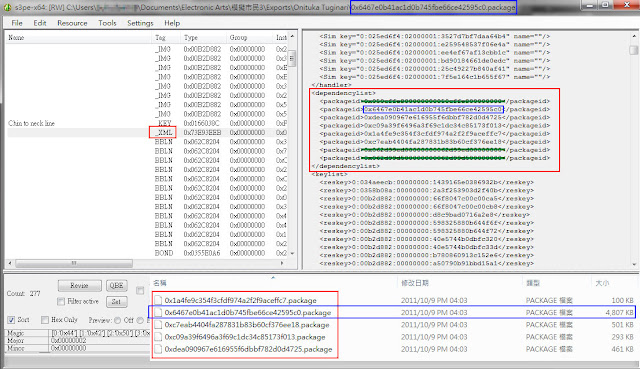 As you can see in the figure.
Four CC in sim3pack is used in creating this SIM.
So there will be five package files unpacked by s3ce (red box), including the major one (Blue box).

You'll find this CC is Eyebrow 16 made by WM(subaxi).

OK. Let's go back to the major package file.
Scroll down and find the "CASP" tag.
The number of CASP tags refer to how many CC in package file you used in creating this SIM.

As in the figure, their are four CASP tags meaning four CC in package file is used. (red box)
Just take a look in to the first one.
The Instance value is 0x692DA305485F9AEA (blue box).
And from the information we can know that this one is an eyeliner. (Cyan box)
Write down the Instance value.
Go find out all impossible Eyeliner CC that match the Instance value.

Here we found eyeliner K from WM is matched.

I hope this method is useful for you to sign the CC credit.

Email ThisBlogThis!Share to TwitterShare to FacebookShare to Pinterest
Labels: Tutorials